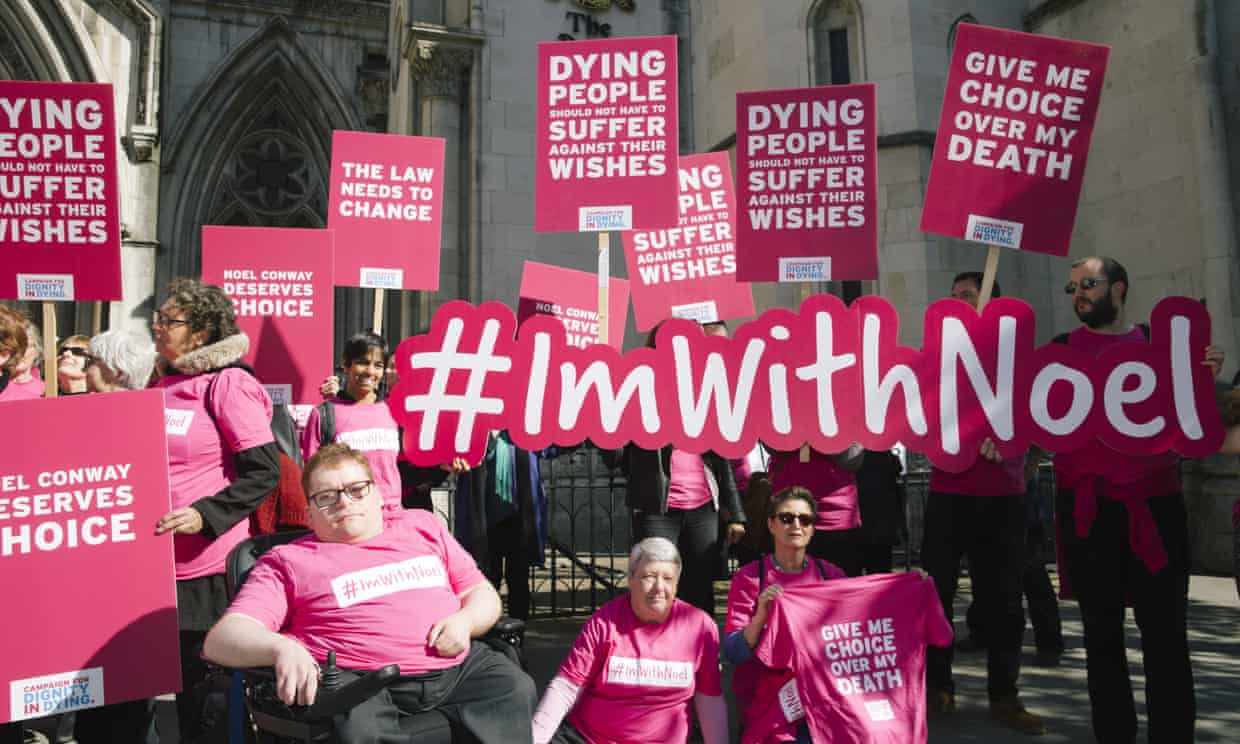 ‘Euthanasia is the act of deliberately ending a person's life to relieve suffering’. An example of euthanasia, given by the NHS, is if a doctor were to provide a patient with a terminal illness a drug they don’t require, ‘such as an overdose of sedatives or muscle relaxant, with the sole aim of ending their life’.

‘Assisted suicide is the act of deliberately assisting another person to kill themselves.’ An example given is a relative obtaining strong sedatives for a person with a terminal illness, with the knowledge that they intend to use them to kill themself, therefore ‘the relative may be considered to be assisting suicide’.

Euthansia is illegal under English law and holds a maximum penalty of life imprisonment. Likewise, assisting or encouraging suicide is also illegal in England and Wales under the Suicide Act (1961), with assisted suicide holding a pentalty of up to fourteen years imprisionment.

Attempts to change the law in the UK

In recent years a number of Bills have been debated in the House of Laws, House of Commons and Scottish Parliament, to allow assisting suicide or assisting dying in cases of terminally ill individuals, including the following:

No Bill has been subsequently passed in relation to assisted dying.

Euthanasia and assisted suicide is a topic which is frequently covered by the British media, particularly the reporting of high court battles as individuals attempt to challenge the law on their right to assisted dying. You can find many examples of cases such as these reported in the mainstream media.

As you’ll be aware, there are countries where euthanasia or assisted dying is legal. You’ll also find many examples of reports of individuals travelling abroad to access these services and the implications of doing so, including cases against family members for assisting a relative to travel for the purpose of ending their life.

A high profile case from outside of the UK is that of Belgium Paralympian Marieke Vervoot, which received widespread media coverage, when she chose to end her life through euthanasia in 2019. As an Paralympic medalist and twice ‘Paralympic Athlete of the Year’, Vervoot made her decision to apply for assisted suicide approval public, making it a high profile example. In their reporting after Vervoot’s death, World Para Athletics states that she ‘had been very vocal about the law of euthanasia and felt everyone should understand the people whose suffering is unbearable’. Coverage such as the ‘major’ article and photographic essay by the New York Times and the documentary film made about Vervoot’s death add to the exposure and provide further information on her high profile decision.

As with the topic of the Northern Ireland abortion law, there is much debate about the UK laws on assisted dying, which is evident from the attempts to debate and change laws in parliament, the cases brought to the high courts and the media coverage of the topic.

An ethical consideration and one which is drawn upon by campaigns or cases requesting a change to the law to allow for assisted dying, is that of autonomy, an individual’s right to make their own decision. The argument is that patient’s should have a choice and ‘the right to decide the timing and circumstances of their own deaths’. However, this is contrasted by the ethical principle of nonmaleficence – a doctor’s duty to do no harm – which adds another layer to the moral and ethical debate.

These are just two examples of arguments surrounding the topic. You may find it useful to explore the debate around euthanasia and assisted suicide further and the moral and ethical considerations linked to these, to support your understanding of the topic and to enable you to discuss these, should you be asked to during your interview.

This can be a challenging topic to balance, as ‘Good medical practice makes clear that listening to patients, providing them with information, and respecting their decisions and choices, are integral parts of good practice’; while the law is clear that assisting or encouraging someone to end their life is illegal.

The General Medical Council (GMC) states that although ‘assisting or encouraging suicide is a criminal offence in the UK’ this doesn’t mean that doctors ‘can’t say anything at all to a patient’ if they request information. ‘When a patient seeks advice or information about assistance to die’ provides guidance on how doctors should respond in situations such as these, to ensure that they comply with the law. It acknowledges the challenges doctors face in ‘responding sensitively, and compassionately’ to a patient who seeks advice under these circumstances, ‘while ensuring that their response does not contravene the law by encouraging or assisting the patient to commit suicide’, and provides advice on how these situations should be handled.

Something went wrong. Please try again.
Thanks for signing up. You will receive an email with information on how to access the videos.

As mentioned above, it’s vital that you have an understanding of the GMC’s ethical guidance in relation to this topic, to ensure that you can draw upon it in your discussions, particularly if faced with challenging scenarios or discussions relating to how you would respond or what your duties would be in situations where patients ask for information or advice relating to assistance to die. Ensure that you are also confident with the definitions of euthanasia and assisted suicide, and are able to discuss the UK law in relation to these.

Having knowledge of high profile cases and court battles, as well as the arguments on either side of the debate, will also help you to have a deeper understanding of the topic and the wider concerns relating to it, and, therefore, will allow you to discuss the topic more generally, while drawing upon the ethical considerations linked to it.